The Azimuth is just another handwired hotswap incarnation of my previous Storm46 design. Practically, the same physical layout with a more curvy plate and an unreasonable amount of encoders.

Finally, I put together my Azimuth (2021-11-06). Didn't bother with the encoders this time, they are only gimmicks for the time being - and will probably stay this way... 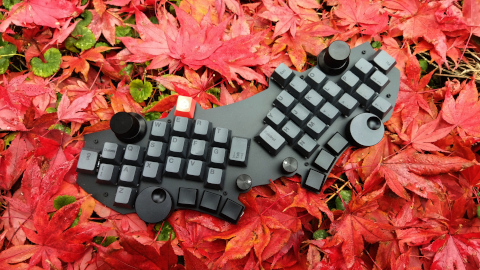 Being a handwired build, all I can share is the Azimuth plate file (top SVG) and a breakdown of costs. I couldn't really add anything to the build log of the Storm, which not just describes the same process but is actually the documentation of making the very same wire mesh repurposed here. Check out that build log if you are interested.

To see the evolution of my plate designs you may check this page.

Btw, I draw these entirely in Inkscape nowadays.

This physical layout is tailored to my personal needs (English+Hungarian with 9 extra vowels), I've been using it for three years now and had no reason to make any changes.

Btw, the original idea was to build a low profile version of the Storm but I'd been waiting for the MBK Legend Myth set for half a year now (beyond the estimated shipping date somewhere in May)... 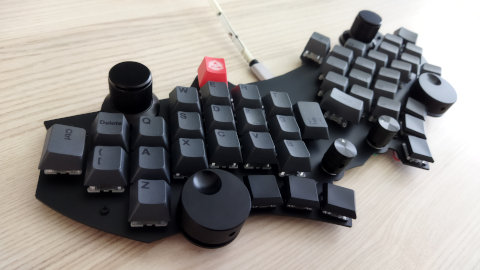 To keep it relatively low-pro anyway, I use it without a bottom plate: it stands on 8 mm stand-offs. 6 mm ones would probably work too.

In hindsight, the whole build cost $99 (total investment), from which the unused encoders+knobs are more than $30, but there are leftovers like almost a full can of spray paint, third of a keycap set (good for macropads), half the switches, so a better estimate of the unit cost would be around $70-80.

This wasn't a particularly difficult birth but definitely a long one: I designed this more curvy plate (2019!), ordered it at a local company (2020, pre-covid), spray painted it (summer of 2021?) and eventually put it together two weeks ago.

Sidetracked by other projects, I was procrastinating this build until I really needed another board for home use (a more silent one).

After I stumbled upon an unused but fully functional wire mesh from my 2019 Storm build, all the work was done in 1-2 hours. Actually, all I had to do was to strengthen some solder joints, remove 6 Kailh hotswap sockets from the thumb cluster and replace them with low profile ones. So the hard work was done years ago. 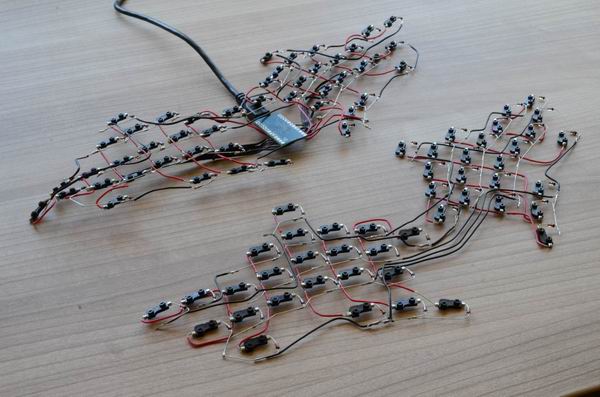 The plate, 1.5 mm stainless steel, was cut by a local company for $9. (That's why I always suggest to look for a local business doing laser cutting.) The matte black spray paint used was bought in a general store. 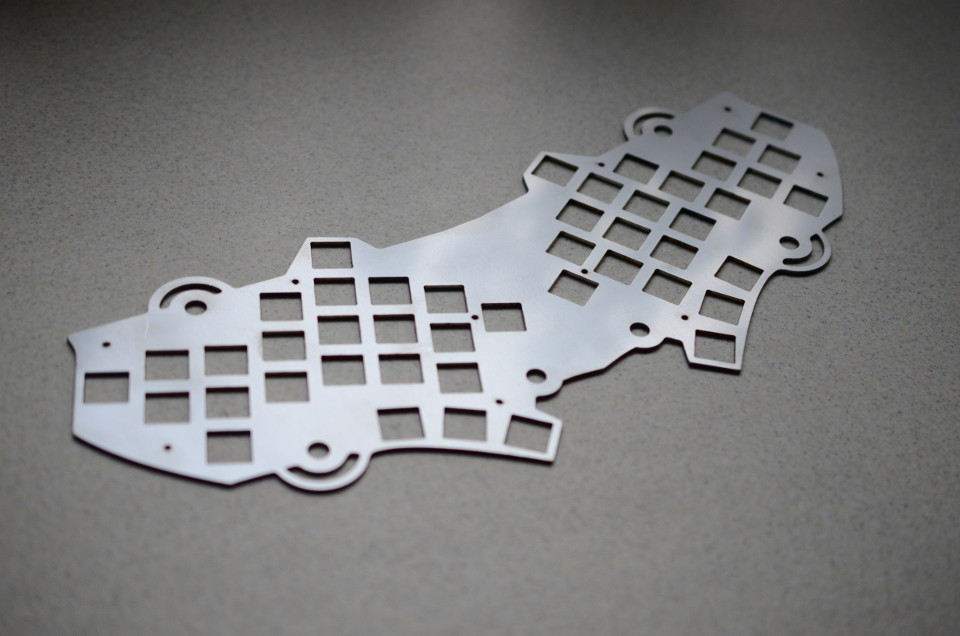 I didn't have any experience with this type of paint (nor with paints in general) and was reluctant to put much effort in the process so I simply washed the plate carefully with liquid soap to get rid of oily fingerprints, dried the workpiece, then applied a single coat of the paint without any surface treatment (like using sandpaper). 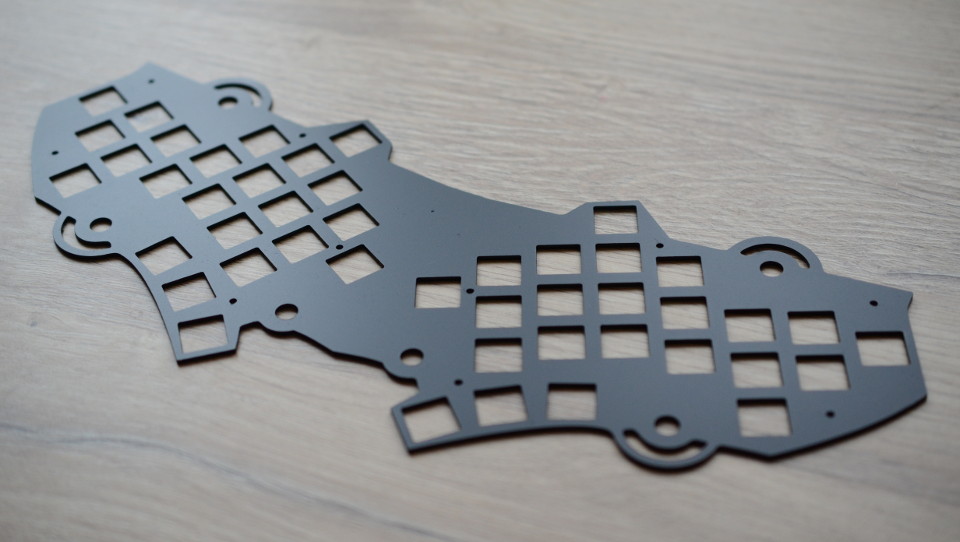 Beyond repurposing the old wire mesh I also found an unused Cherry keycap set in my drawer, and had some Momokas laying around from their free sample pack, more than enough to populate the plate.

Btw, featuring Momoka Frogs, this is my first time using linears for a longer period. I love their feel, can totally understand why people love linears, but I'm not sure about the usability. Coming from Box Whites, after almost two weeks, I still make a lot of mistakes, and to alleviate this I have to bottom out all the time and type much more aggressively than I type on my clicky one normally - where I can stop the keypress after the tactile/auditory feedback.

As weird as the pinky cluster may look, I've been using this layout for 3 years now and it makes a hell of a lot of sense to me.

The offset is designed with my finger lengths in mind, after doing proper measurements, drawing some sketches, and doing cardboard prototyping. (Apparently, these offsets may not work for you.)

I don't know about you, but I can't comfortably reach the bottom key in the outer column (of most columnar splits) without an extra bit of forearm pronation. For this very reason, I put those keys in an additional outer column. 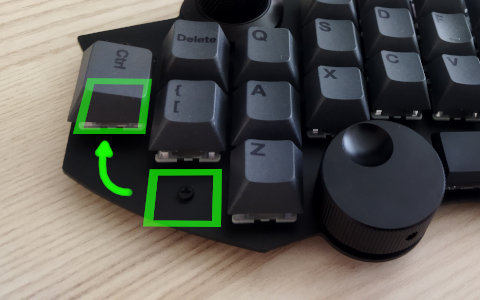 Reaching over to these feels much more natural to me, still, in my logical layout I put two of the rarest Hungarian accented vowels there so they are not even used when I type in English. (Why don't I put them on another layer? Well, I don't want to break the natural flow when typing in Hungarian and they are still more frequent than X, W or Q.)

Obviously, with this Pro Micro based build I couldn't use all the six encoders at the same time, even if I wanted.

The key matrix itself requires 15 pins. Since I utilize the Pro Micro's LED pins (Pro Micro hack) I have 5 pins left.

Four encoder presses fit in my matrix but to handle the rotation (2 pins per encoder needed), the 5 pins are sufficient for only two encoders.

I had a Teensy 2.0 at hand (25 pins), enough for 5 encoders, but honestly, I lost interest in encoders since I designed this plate. But they look kick-ass.

This plate was originally intended to test encoder positions, as well as different types of encoders and knobs.

Results: all these quality CNCed encoder knobs (from aliexpress) look and feel awesome, and both types of encoders (ordered from aliexpress too) are awful.

Once I can put my hands on some quality low-pro caps I'll probably makes a similar plate with (vertical) Choc spacing.

Thanks for reading thus far! :)