I acquired this vintage Reuters keyboard in 2020. After posting a photo on Reddit, I got a lot of questions both in the comments and in private messages.

So, after only eight months, here is a more detailed post, stuffed with photos, which hopefully answers most of those questions. Slowly but surely. ;)

(And if you'd like to browse an even bigger gallery of shots let me know what's the best way to share about 100-200 hi-res photos nowadays.) 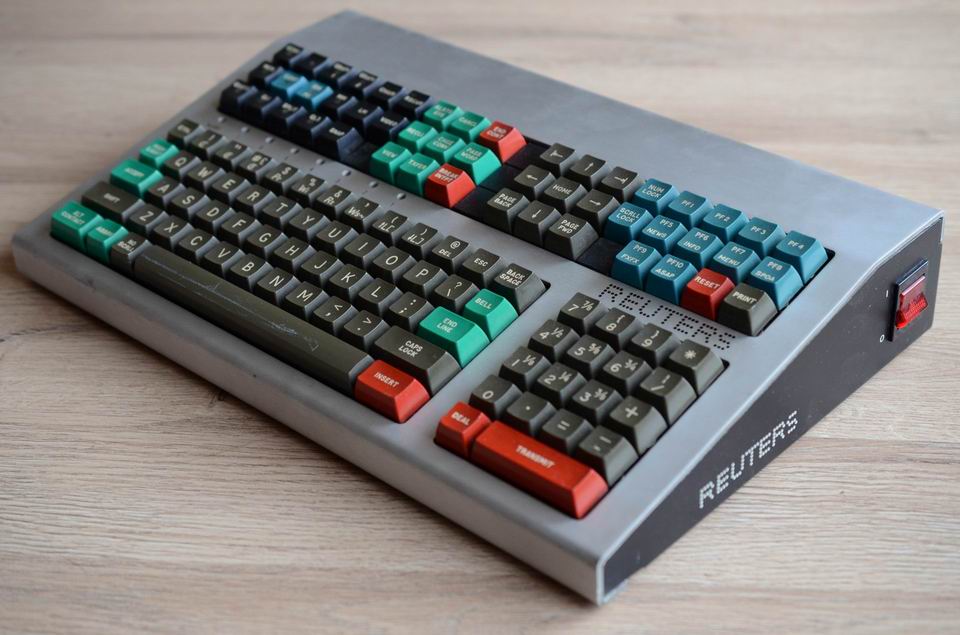 How to acquire vintage keyboards?

Just keep your eyes open. What's trash for someone is a treasure for another.

In general, I would discourage you from buying on Ebay. Overpricing is guaranteed, just like lots of concurrent buyers. It may not even work for international buyers because of the insane shipping prices + VAT + whatnot...

Since I'm not the dumpster diver type, which btw is a great way of finding cool stuff if you were born into the right place, I mostly visit small local classified advertisement websites.

And that's exactly how I found this Reuters. The best thing? I bought it as the only bidder for a ridiculous price I don't even dare to put here in fear of being stoned. ;)

What's a trading keyboard or rather terminal?

The "Reuter Monitor" was a market service started in 1973 and was formally turned off in 1999. At its peak it was serving 100,000 workstations, with terminals located in almost every country with an active economy (source). 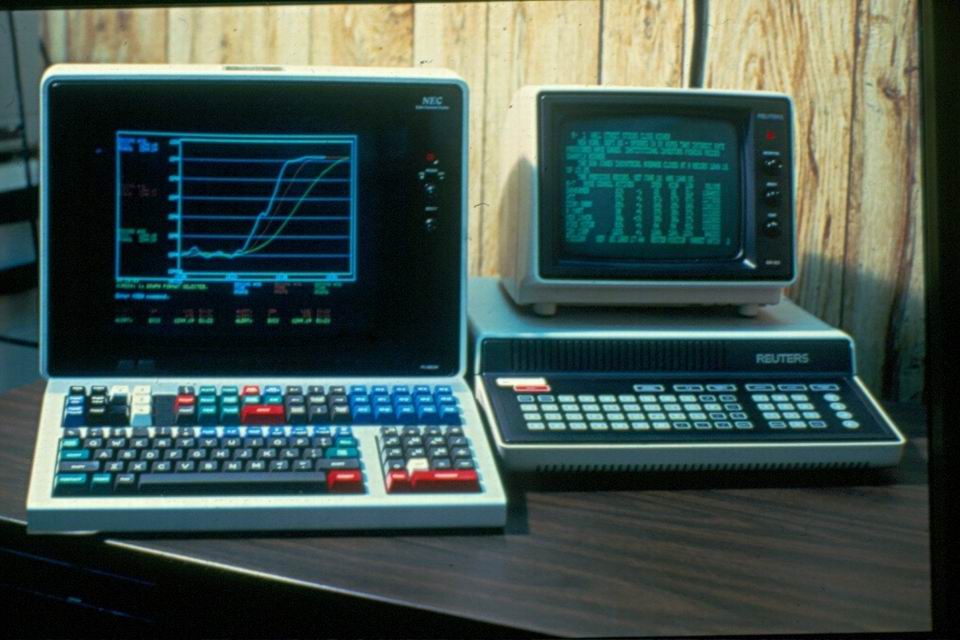 Remember, in the '70s and '80s there was no computer mouse nor graphical user interfaces, thus, a keyboard with dedicated keys for trading and others with programmable functions was probably a valuable help for traders.

Manufacturing of this specific Reuters model started in 1984 and this specimen on the pictures was made the next year (background).

According to the seller and a sticker, this one was used by MTI (Hungarian state news agency) for "demonstration purposes". What could they use a trading service for, especially as a communist/socialist news agency behind the iron curtain, is a real mystery to me.

Actually, the keyboard wasn't really used I guess. There's neither shine on the caps nor the usual dirt under the keys.

Two-piece case. A thin bottom case bent from a single sheet of 1.5 mm thickness with matte black finish and the Reuters logo on the outside. 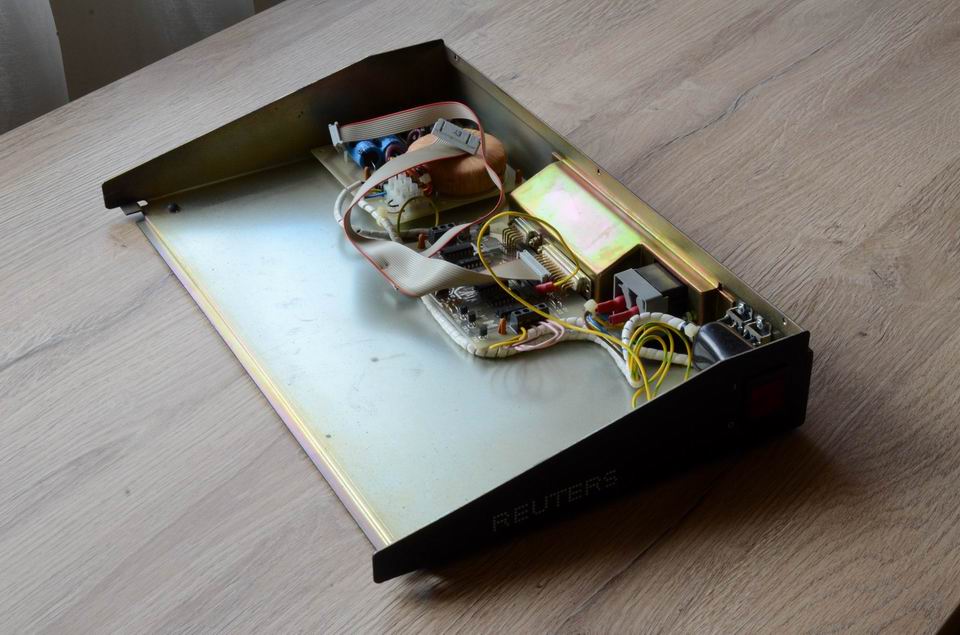 And a thick 3 mm brushed aluminum top which covers also the front – bearing a Reuters logo too and holes for some indicator LEDs. 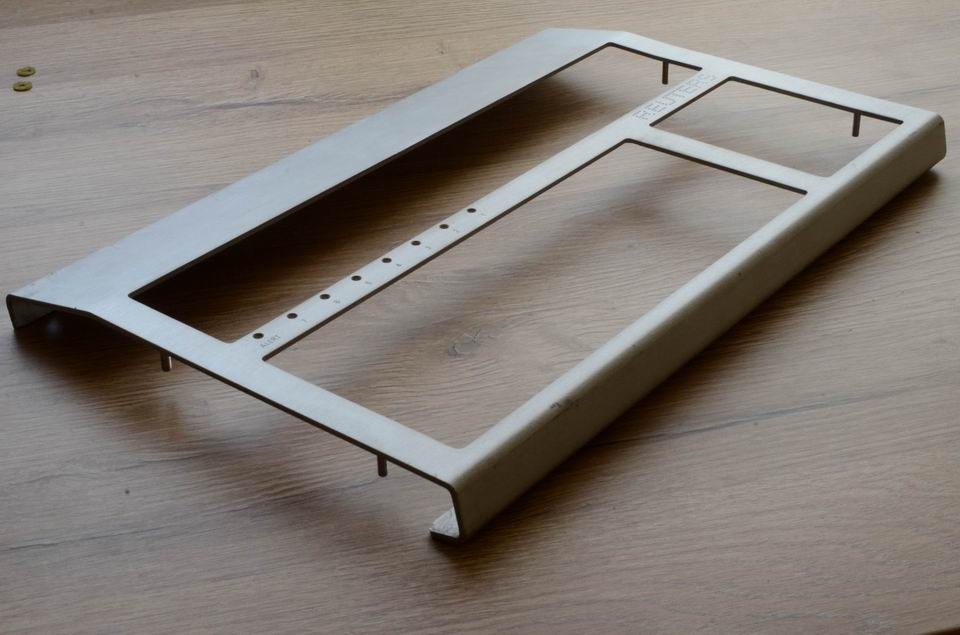 Since the top part slides in a rail at the front, holding it firmly in place, all you need to open the case is to unscrew three screws at the top back part. 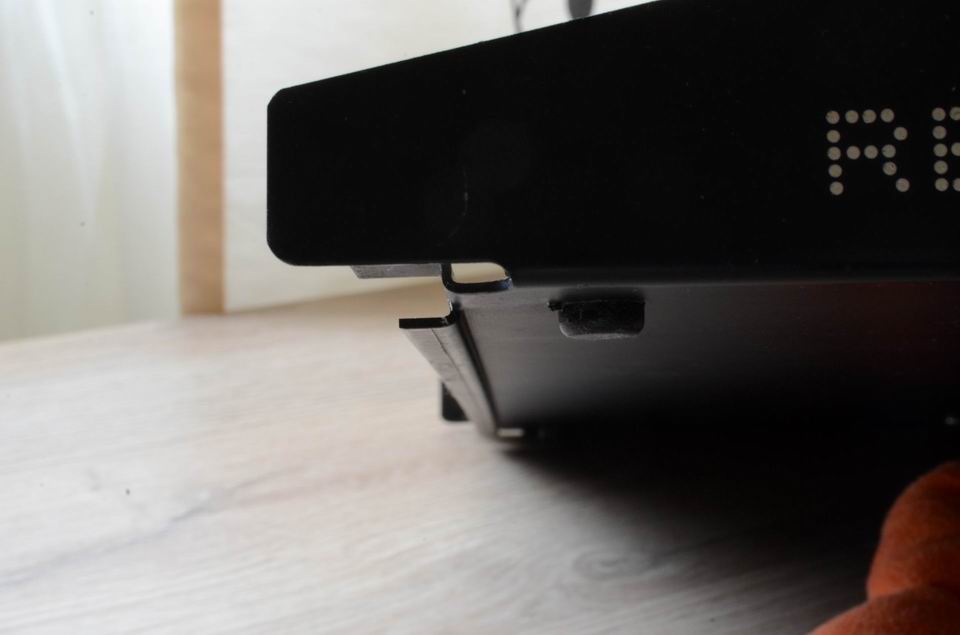 At first, I really liked this design idea, but it doesn't work in practice. Just a slight bend in the long rail and it stucks in or you can't put it back.

The form factor and arrangement of keys precedes the DIN standard and as such is quite unique.

121 keys. Basically a standardish alpha area with a numpad on its right. Plus with an arrow and navigation cluster, lots of dedicated keys and function keys in the top part. 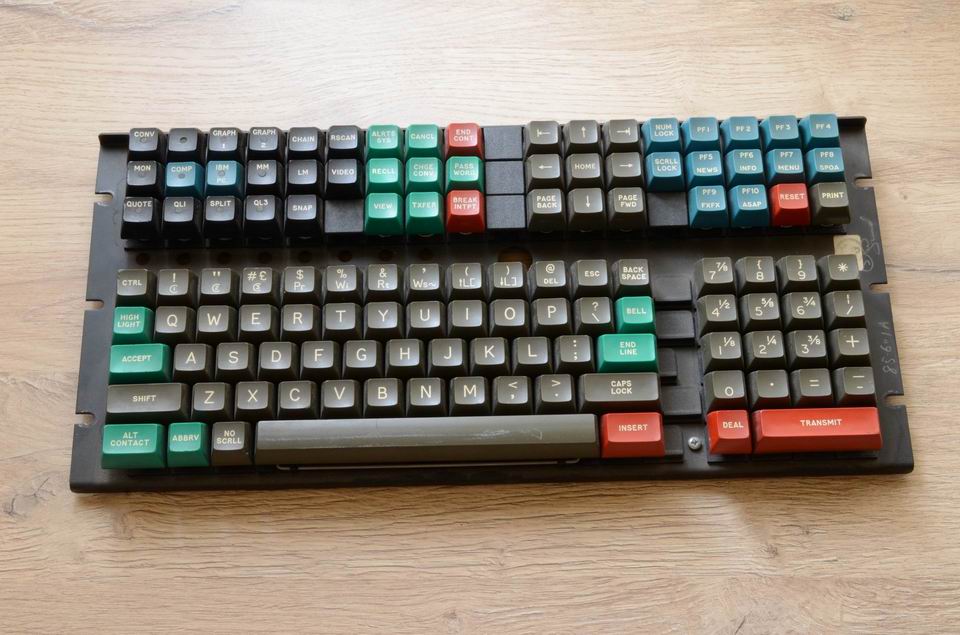 There are 12 indicator keys with LED backlighting (top left part).

The layout is actually almost ortholinear. This might not be obvious at first sight but look again: perfect ortho except one single row. 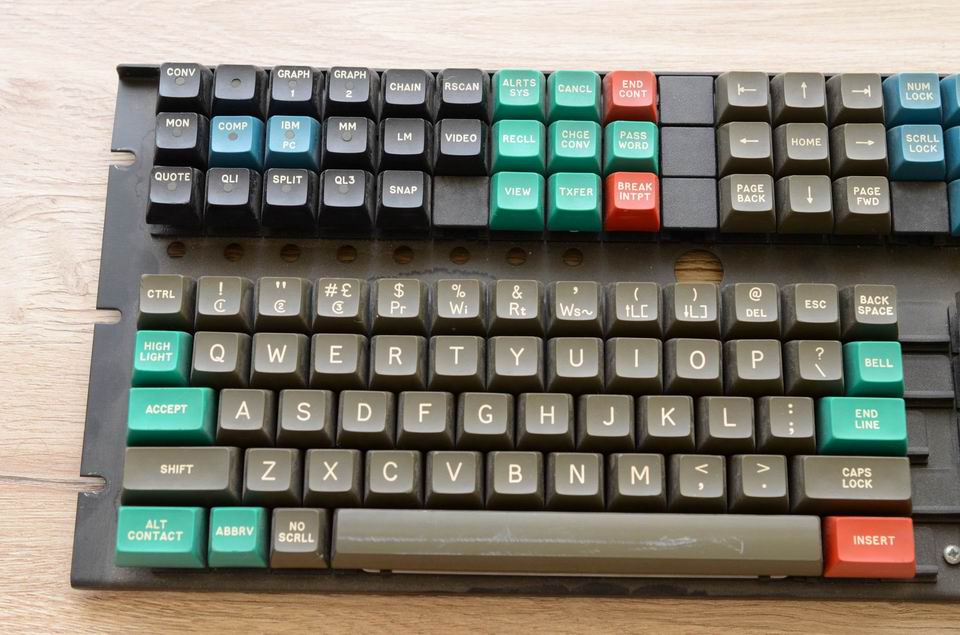 The home row is offset by 0.5u which results in a very regular, symmetric alpha area. It's quite incredible how the obsolete horizontal staggering could be easily turned into an at least symmetric layout.

This design results in more regular modifier sizes and could have made keycap compatibility easier too: all modifiers are 1.5 or 2u wide.

The numbers have the appropriate eighth/quarter sublegends since trading happened in fractions before 2001 on U.S stock markets.

Stocks have been traded in eighths for more than two centuries, even before the New York Stock Exchange was founded in 1792 under that famous buttonwood tree in Manhattan. The pricing stemmed from Spanish "pieces of eight", reflecting at the time the Spanish Empire's lingering influence as a global currency – chicagotribune.com. 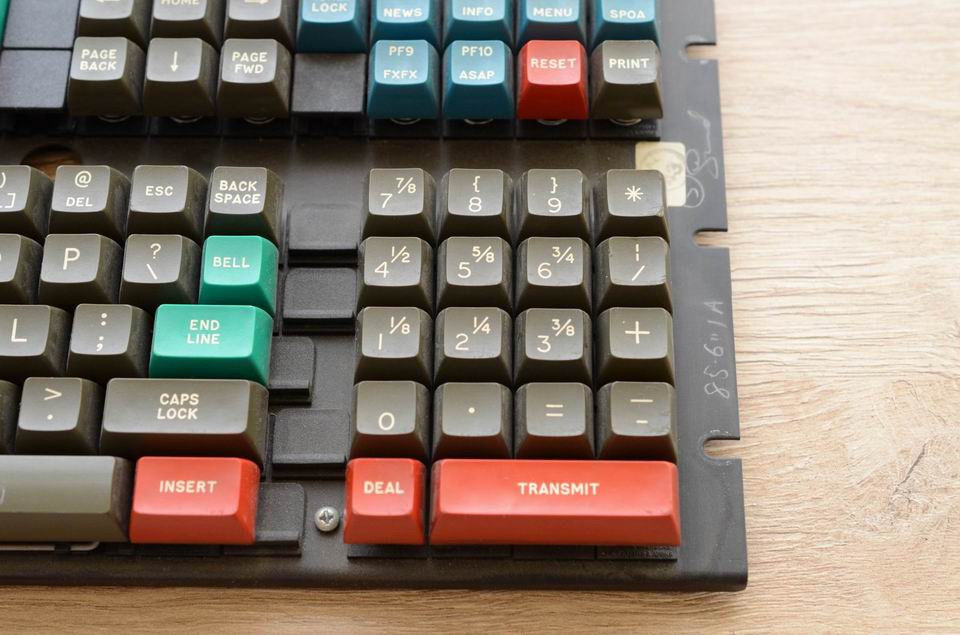 Zero has no fraction legend but, strangely, is offset anyway.

The keyboard is full of cool keys: Bell, Chain, Deal, Highlight, IBM PC, Password, Transmit, etc. – each with its own history.

E.g. here is the story behind the Deal key:

[1980]Late in the Dealing project the “deal key” is added as a last-minute fix to ensure that when dealers deal there is still contact between them. A failed connection could lead to confusion as to whether the deal had actually been executed. Nearly 12 years later the automated matching system (D-2000 Phase 2) will encounter exactly the same issue (known by then as the ping-pong problem) which delays the launch by one year. It is strange how knowledge and experience get ignored – thebaron.info. 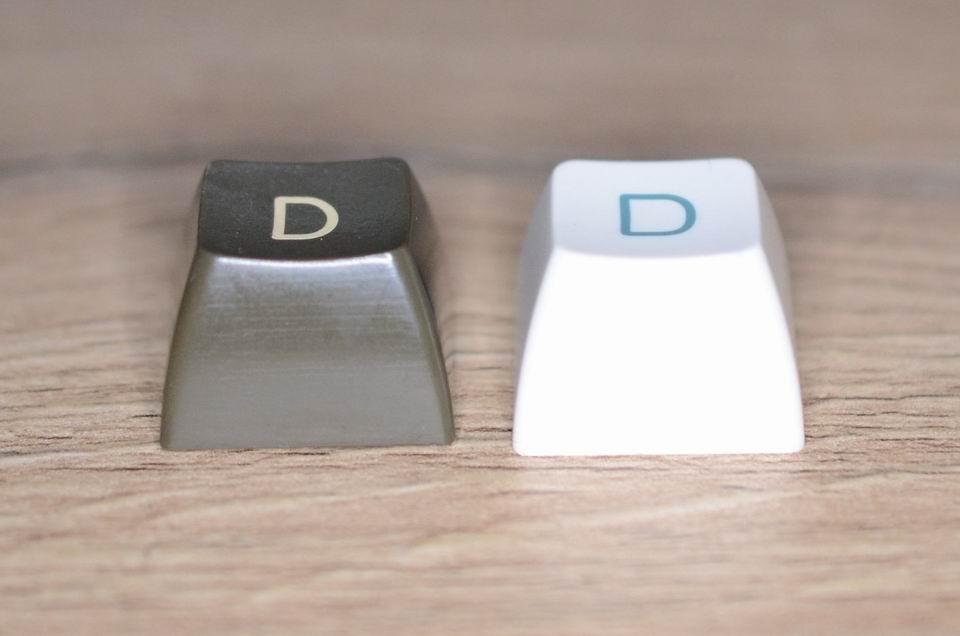 The hues aged well, however, the once white legends are yellowish now. Other than the legends, you can't really see this yellowing on the colored part of the caps – except blues. 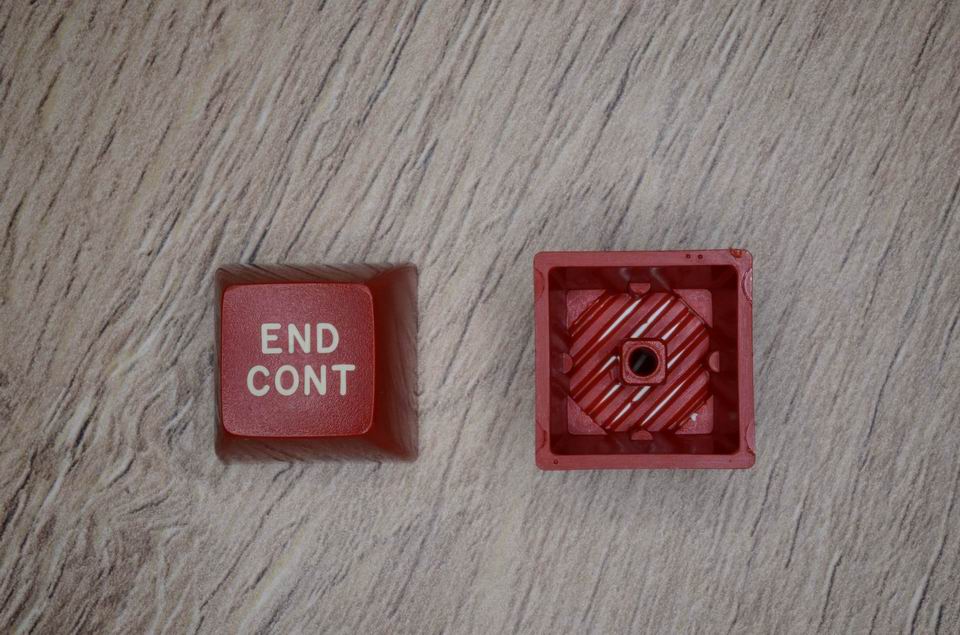 Red may get a slightly different red, just like green becomes another hue of green. However, adding yellow to blue results in green, and that's exactly what happened to these caps. 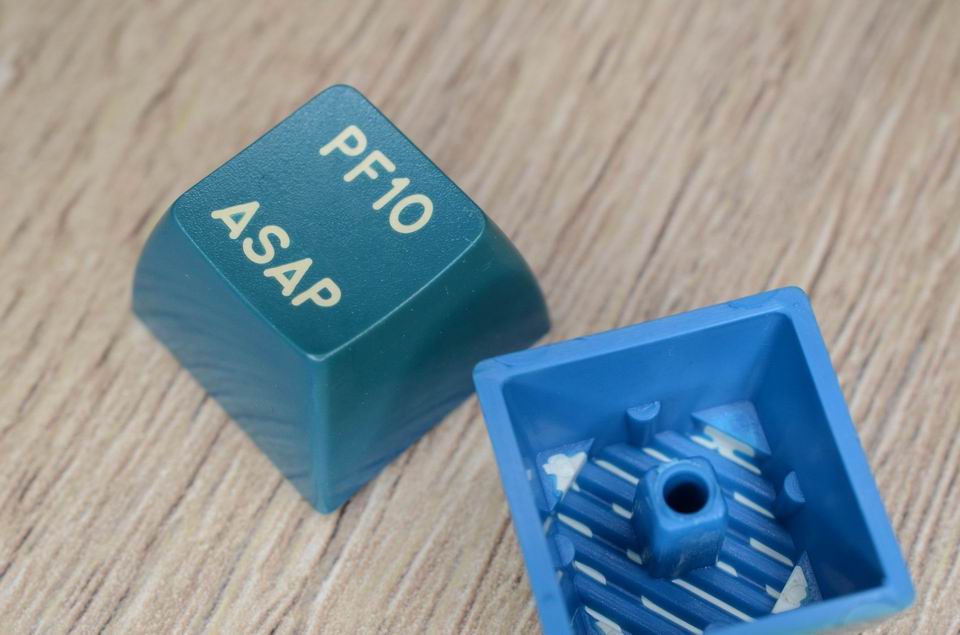 I like the aged hue more though so I don't plan to experiment with retrobrighting. 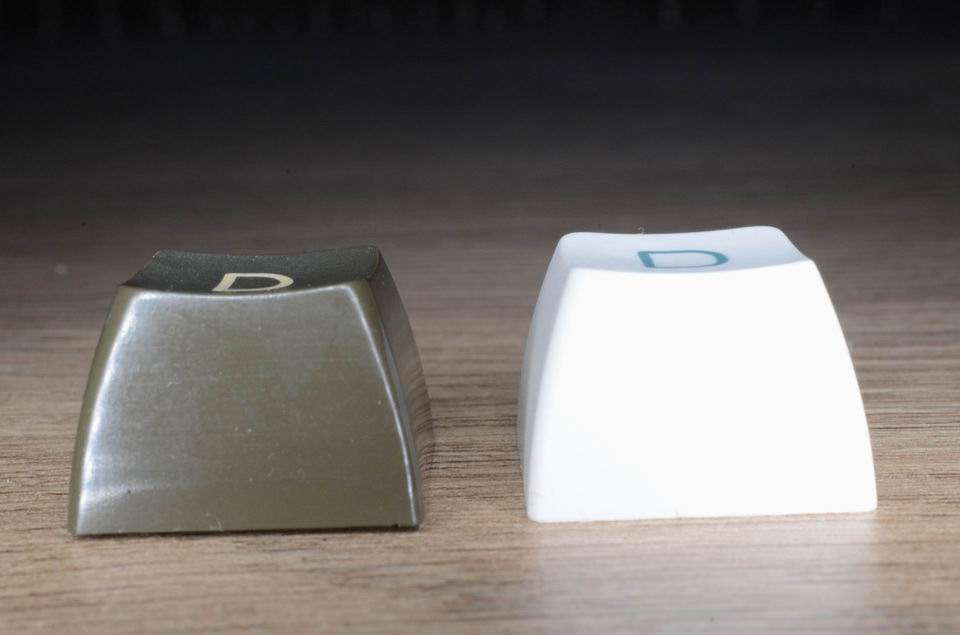 The colors are fantastic and they really add to the look and probably the function. Manufactured by Devlin? I'm not sure.

It's on the thinner side of the range when it comes to a comparison with some of their contemporaries: from my limited sample, a Honeywell and several Datacoops from approximately the same era (coming soon) are much thicker, and this Reuters is almost the thinnest – only beating Epson (which is rather DSA-like). 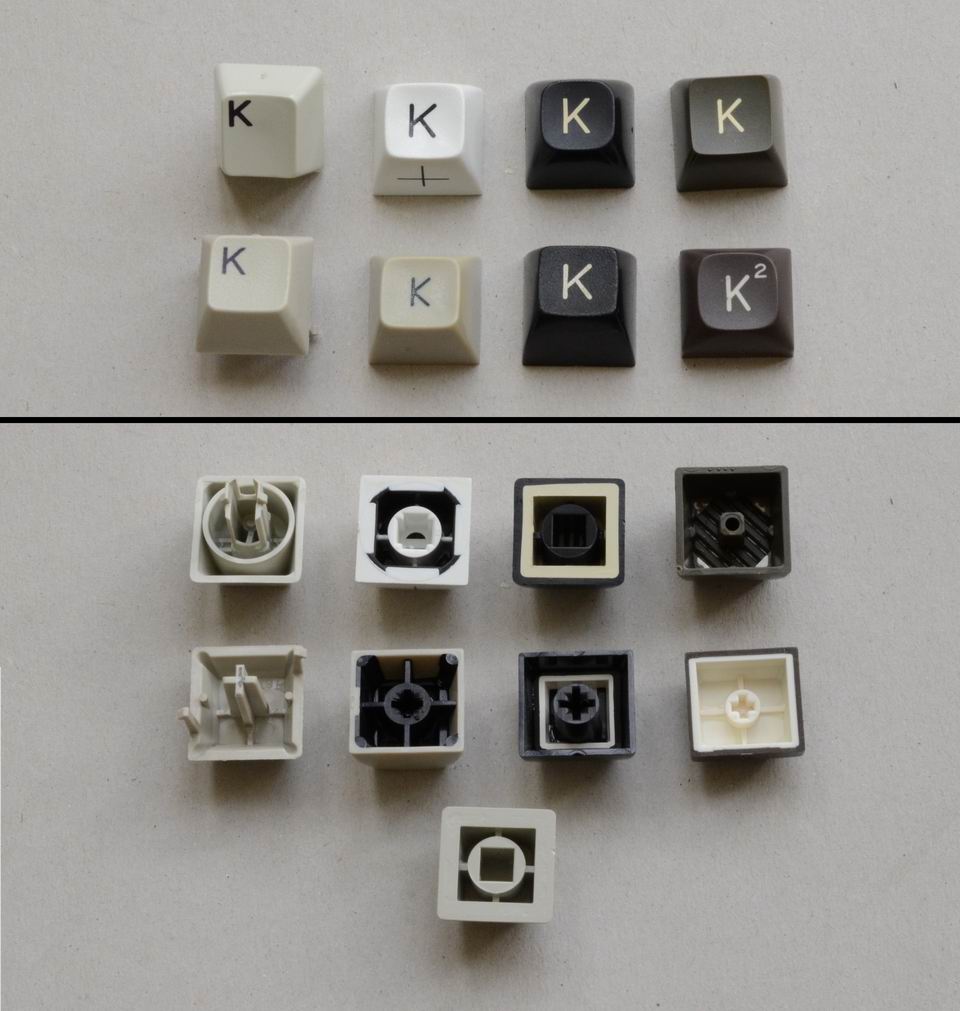 (Here is a table with keycap weights: vintage keycap comparison. I might add more caps in the future.)

The plastic for the legends is sparingly used. In one case maybe too sparingly (photo pending).

Because of the regular semi-staggered layout, some modifiers are 1u, plus we have four 1.5u and two 2u modifiers. (Additionally, there is a 3u "Transmit" button on the numpad.)

All in all, the look of this set may eclipse some overhyped GMK sets.

Only the spacebar has a stabilizer. No modifiers have stabs or even dummy stems. As a result, you simply can't press 2u and 3u keys down if you try it too far from the center, especially on the wrong side. 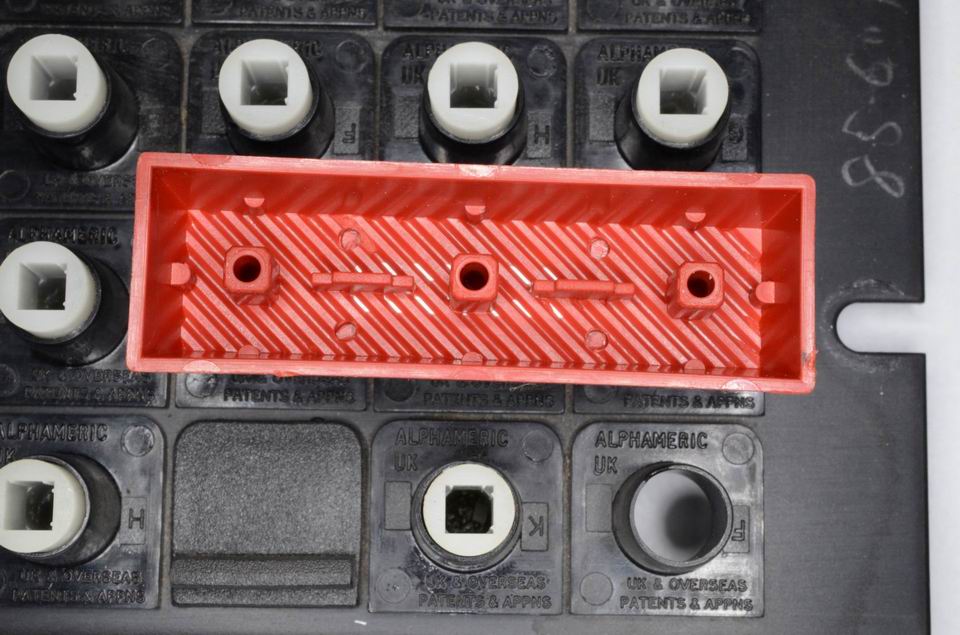 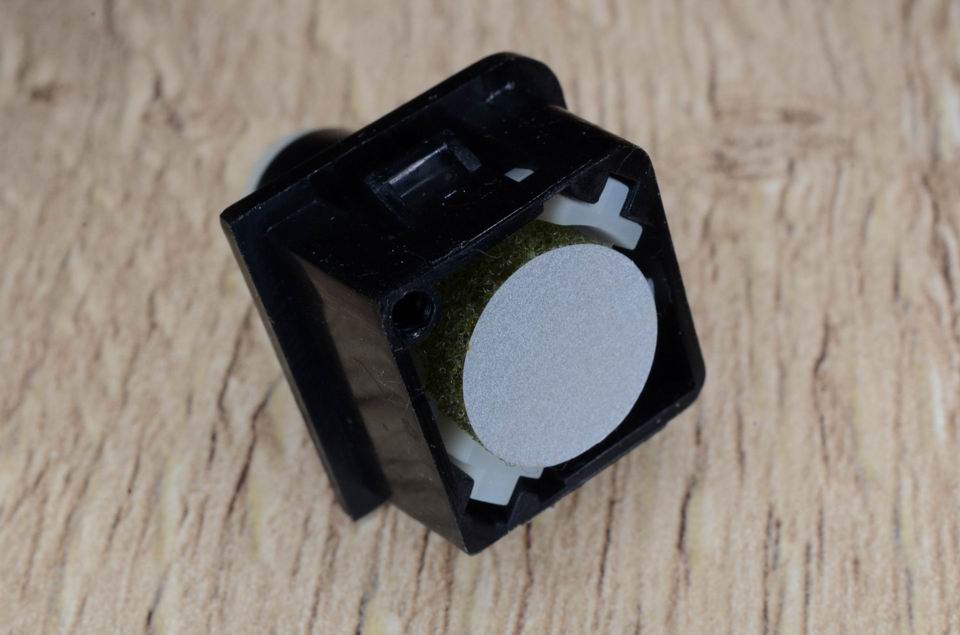 The switch is open at the bottom and the stem pushes the conductive foil to the bare PCB. The foil is attached to the stem through a spongy foam to provide some cushioning.

The switch housing is a single piece, open at the top and bottom. 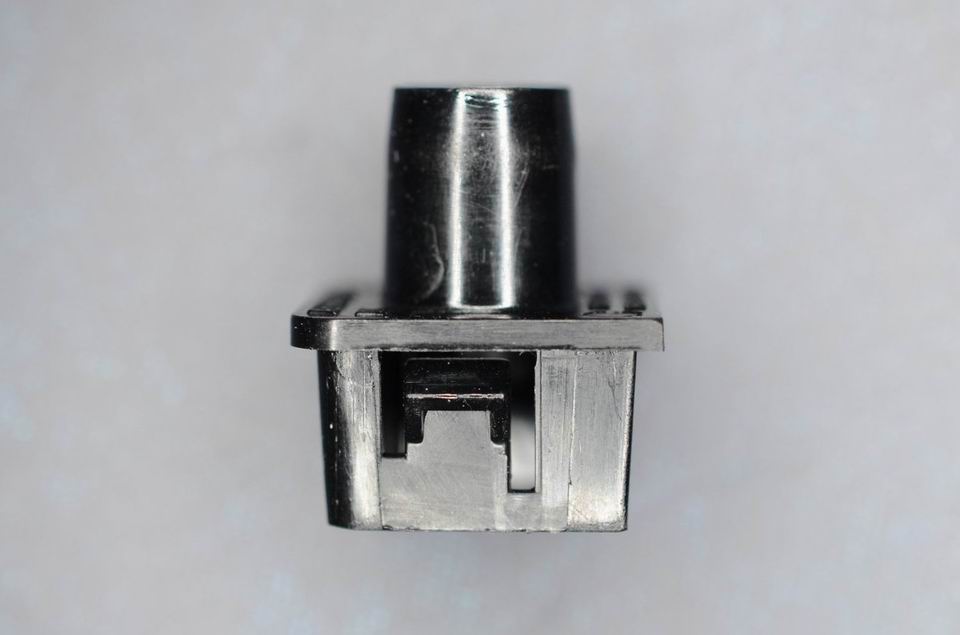 After 35 years, the foams are still in good health. Only two foam disks fell off, both at the indicator keys, probably because of the smaller surface (they have a hole in the middle for the LEDs). 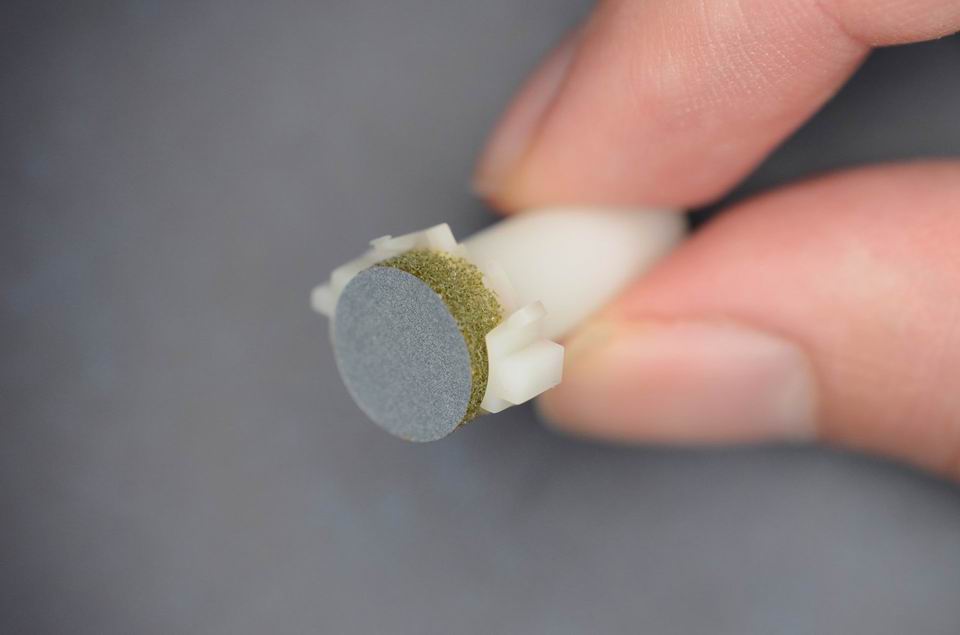 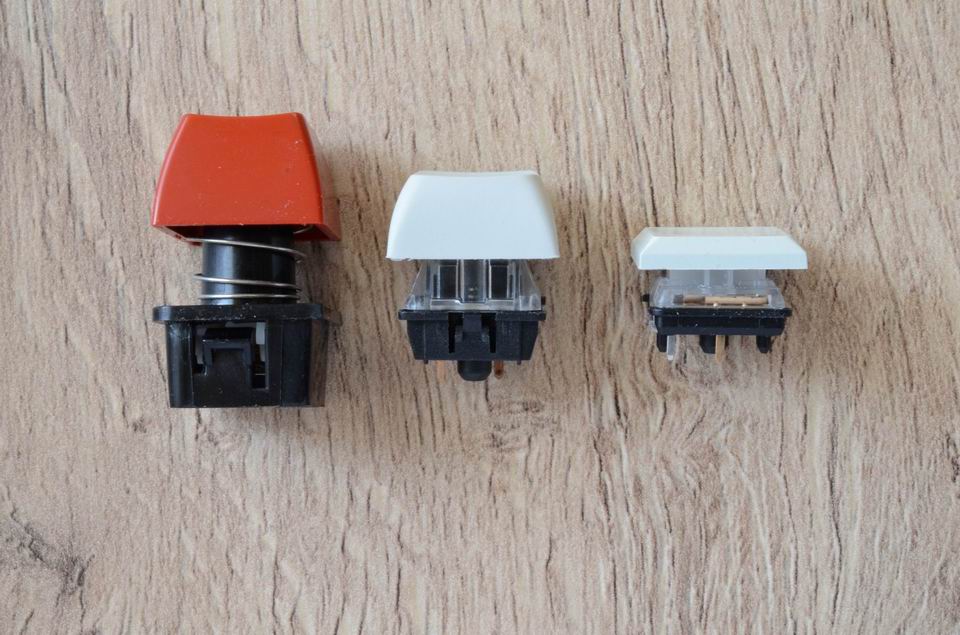 No wonder these switches were replaced in the following years by Cherry MX and other "low profile" switches of the time after the first DIN standards determined the maximal height of an "ergonomic" keyboard in 30 mm (home row).

In contrast to contemporary switches, the springs are outside of the switch housing, below the caps.

They come in two weights: all keys have 36-40gF silver ones, except the single spring for the 3u Transmit key which is about 50-60gF and is black.

Because of its external placement, the spring is much larger than usual nowadays: its height is ca. 19 mm with a diameter of 11 mm at the base (switch housing) and 13.9 mm at the top (cap).

Some benefits of this switch type even if it may look bulky:

The switch plate is a sheet metal with matte finish: back edge bended upwards, front edge downwards. The plate is screwed to the upper case. It has the date ("85-6 11") on it, as well as a signature written by pencil. 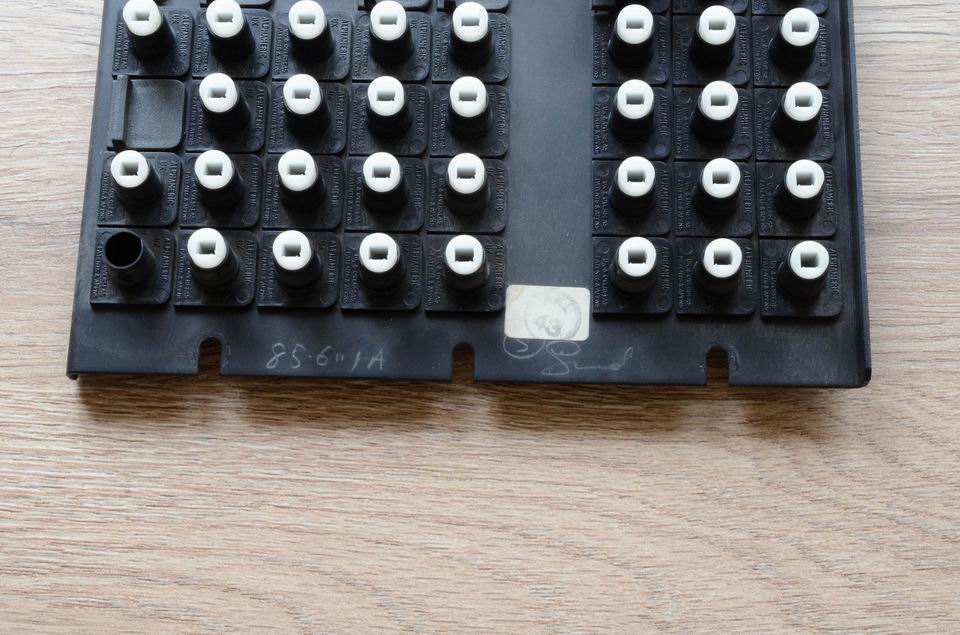 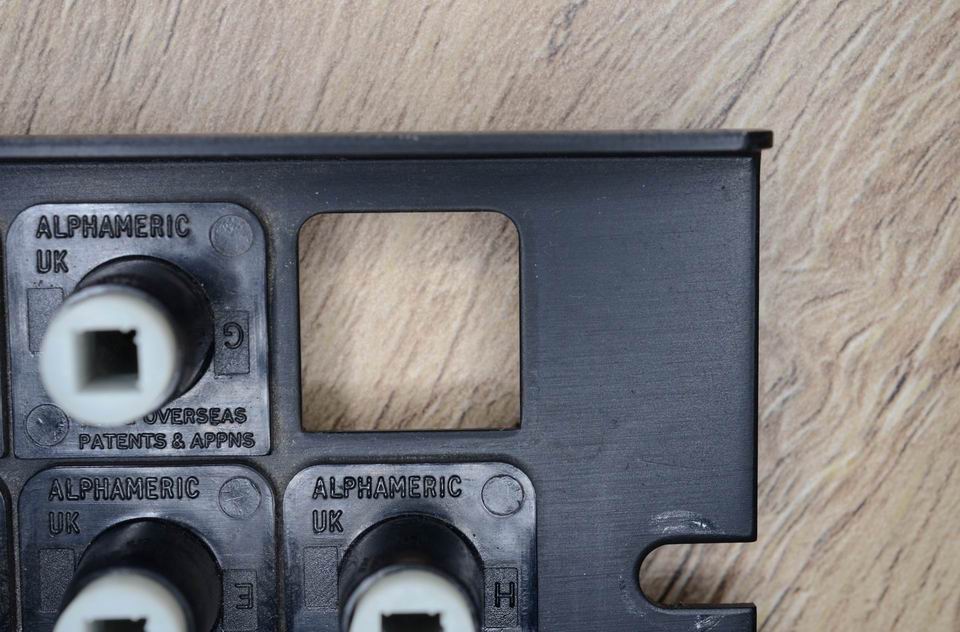 Probably, this keyboard model came in many versions, tailored to the needs of the specific client, and the arrangement of the top group of keys could be changed by these nice blockers. (The PCB has the contacts below these blockers too.) 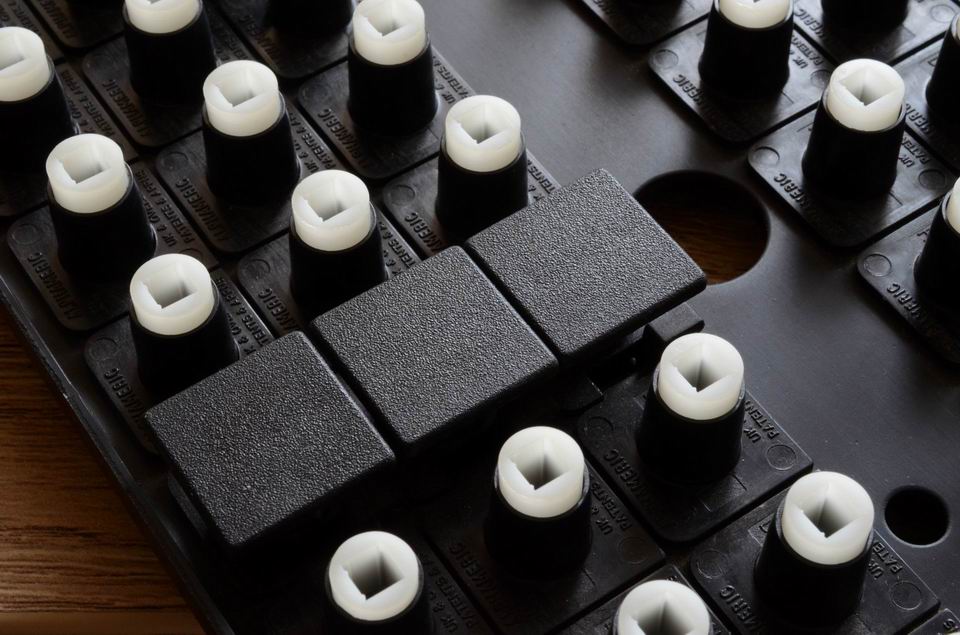 The keyboard has 3 PCBs, two smaller ones in the bottom case and the main PCB attached to the upper case:

The keyboard is powered by 220-240V main which is transformed to 5V right after the power switch. This PCB resides in the left back corner of the bottom case. 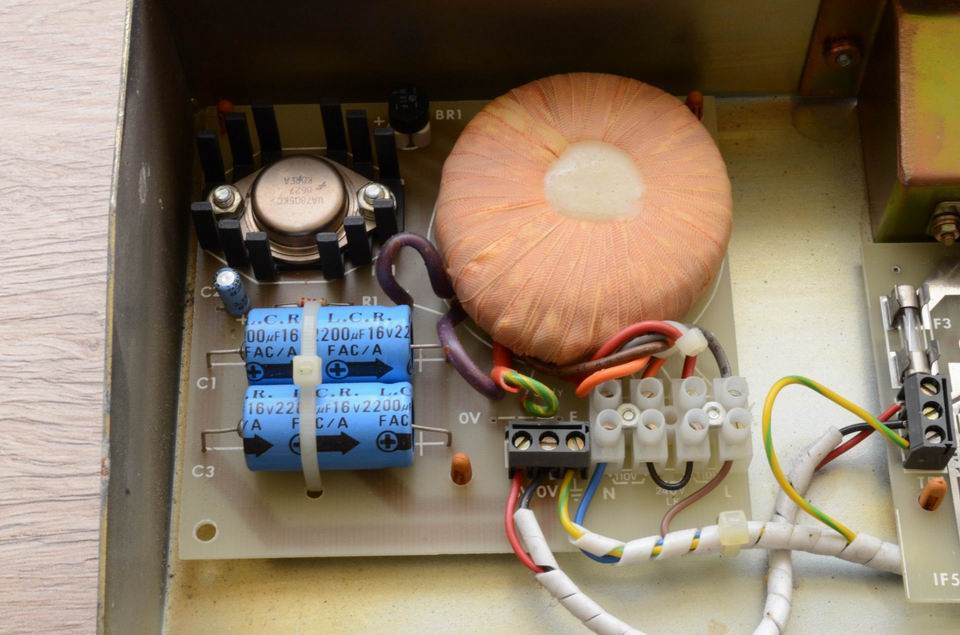 Another small PCB in the bottom case is responsible for the communication (?) through the serial and parallel ports. A fuse gives a nice touch to this part. 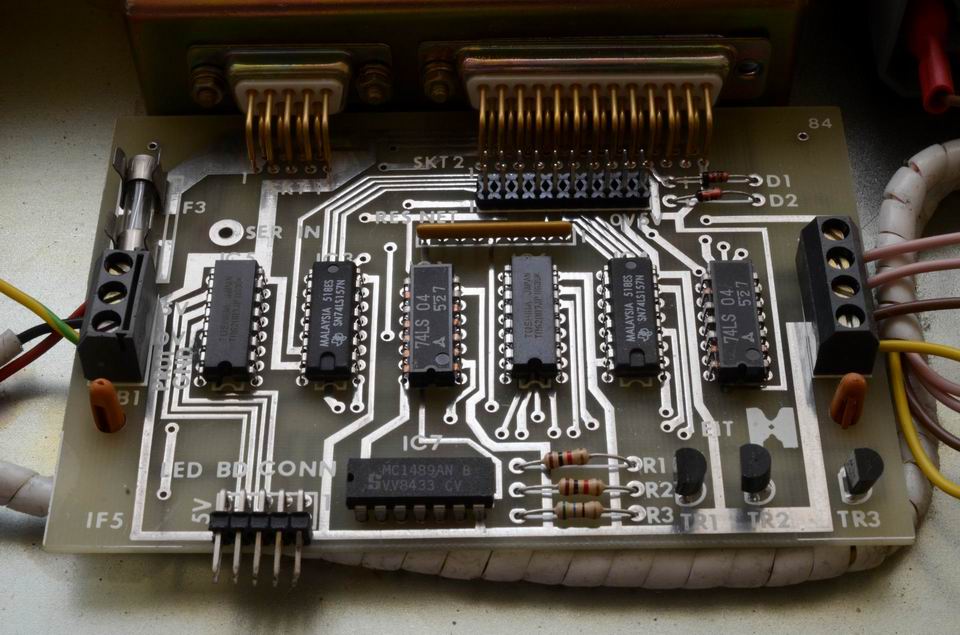 The main PCB is top mount. The switch plate and the PCB are screwed to the same threaded poles of the top case with thick and sturdy stand-offs.

One of the most spectacular areas of the PCB is probably this forest of LEDs. 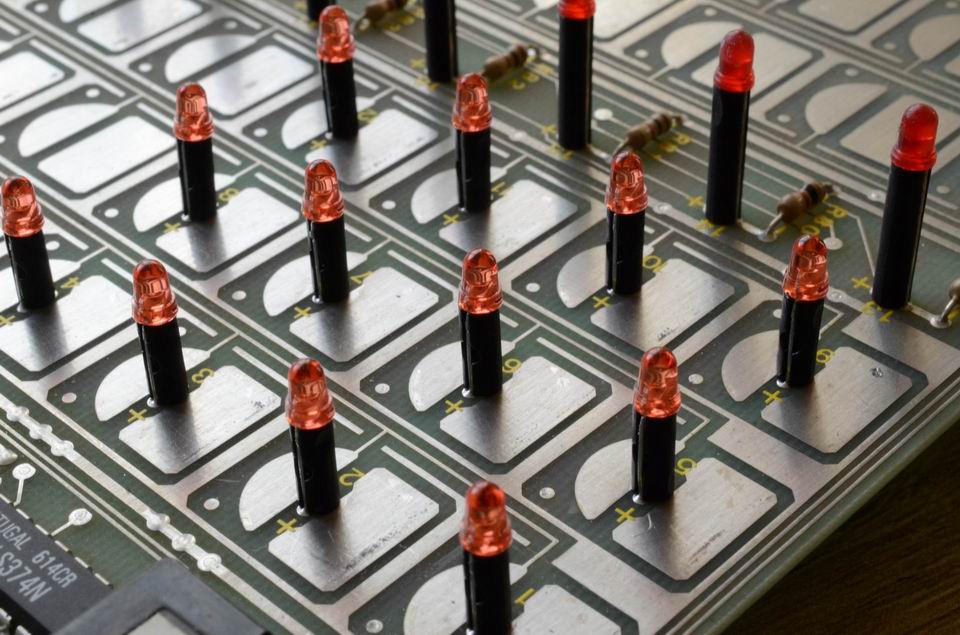 Plastic poles support the LED legs in two different levels (because of the angle of the top slope). They have a nice amber light. 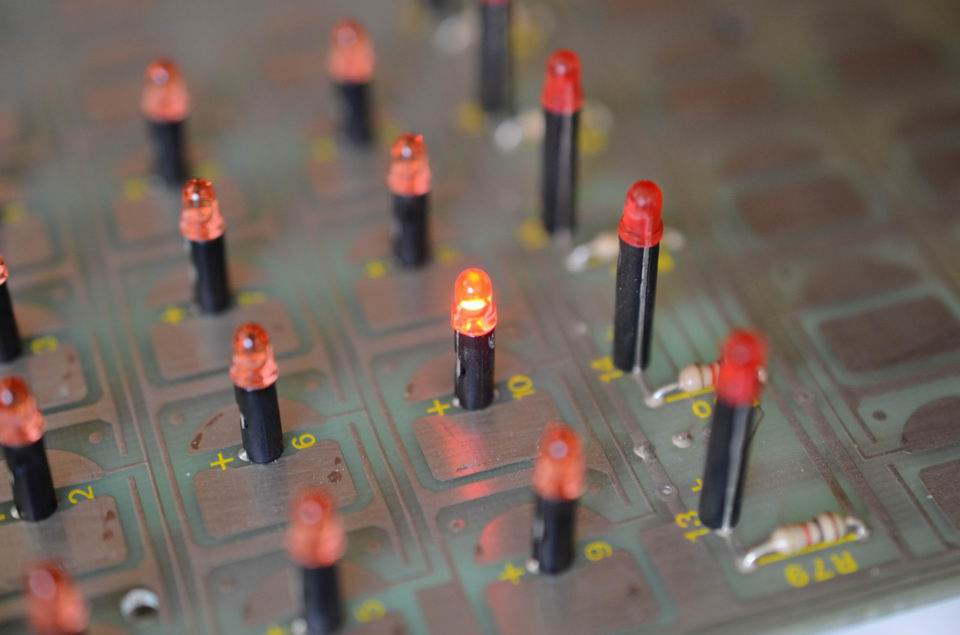 The top side of the PCB has the row traces of the matrix and large pads for the switch foils. 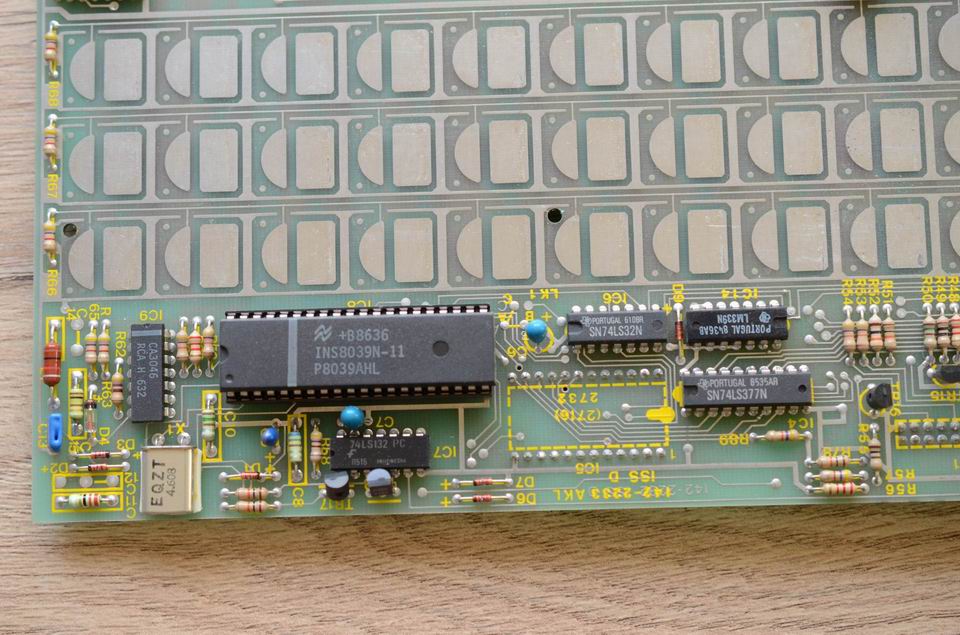 The traces on the bottom side are the columns of the matrix. They look perfect except the part shown with the bulged fill. 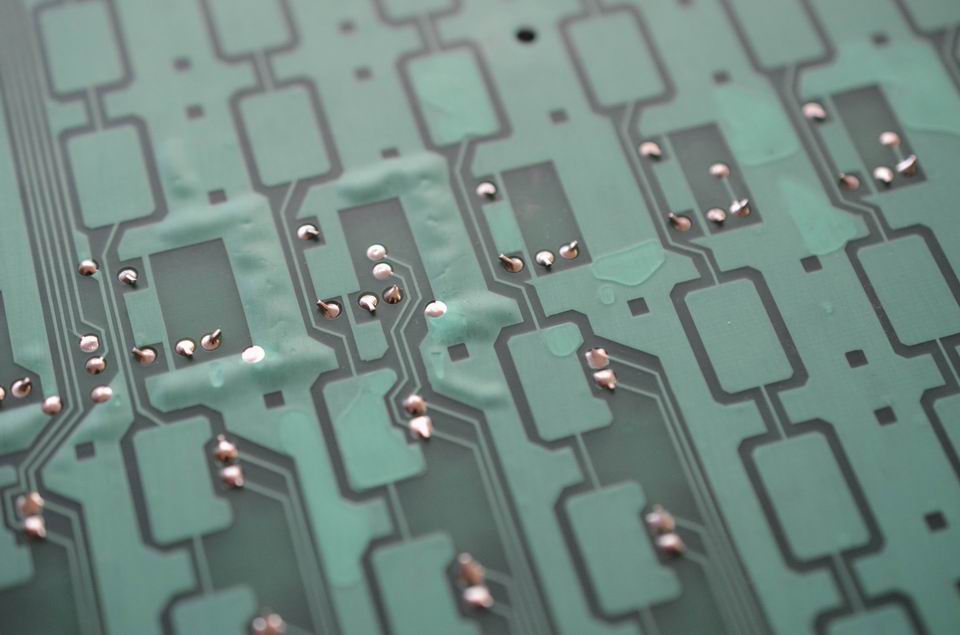 I love these stickers. The signatures of people who manufactured and tested this artifact add a nice personal touch. 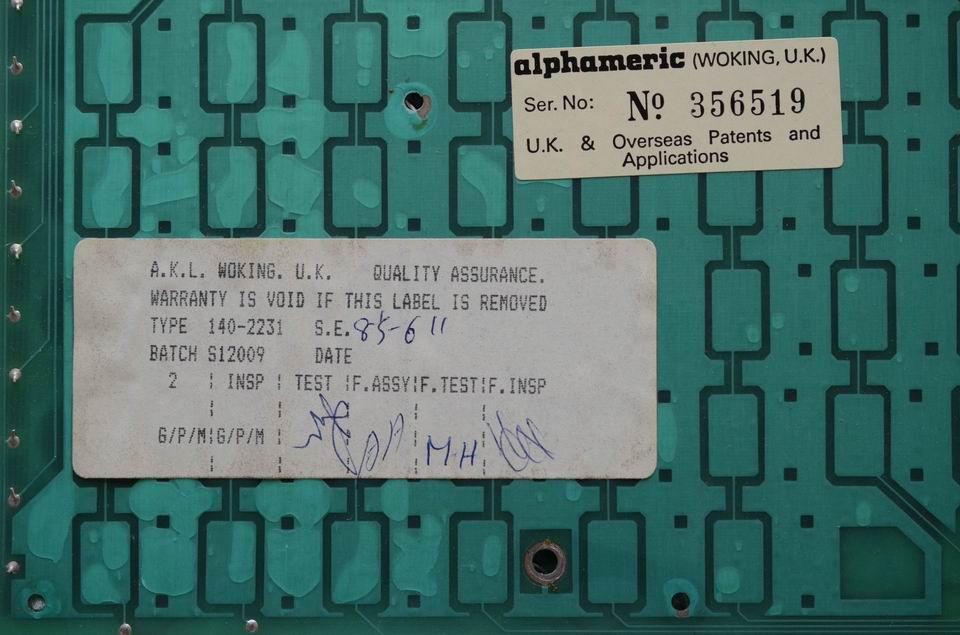 Since I had to disassemble the keyboard for the photos I cleaned it thoroughly.

After vacuuming the dust I usually remove the caps and put them in warm water with a dishwasher tab. (Careful though, use this only with doubleshot caps!)

Wiping the top aluminum case with a wet sponge turned the surface into an ugly, patchy, dirty and dull looking one. According to some suggestions found on the net, I tried to clean it with a lemon cut in half (didn't work) and later with other light acids.

Takeaway: Even something like a harmless wet sponge can give you some hard time...

Well, the reason I love this Reuters model, and most vintage keyboards in general, is NOT the typing feel and sound to put it mildly.

The sound is hollow, the feel is scratchy – just imagine the huge plastic surfaces of the switch housing and the stem, as well as the ping of the bulky spring.

At this time I see no point in converting this keyboard. I consider this keyboard a piece of art, just like a painting you put on the wall.

I use a real custom ergonomic, split, columnarly staggered keyboard with thumb clusters. Using anything else would be a major step back in comfort and productivity.

Instead, this Reuters keyboard will be probably one of the best-looking pieces of my vintage keyboard collection. 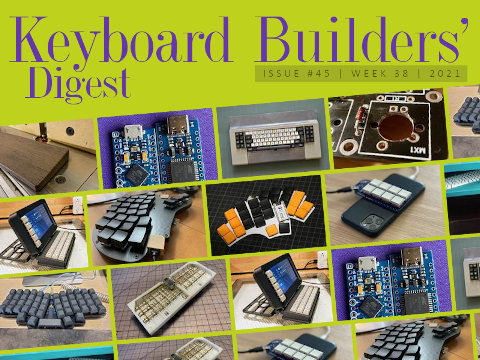